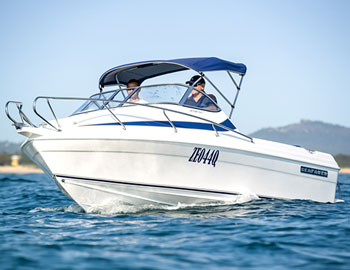 To sell in what is perhaps the boating industry's most competitive boating market sector, Australian six-metre cabin boats have to be good. So it says a great deal that Seafarer's Victory has long been considered the standard by which others are judged. Having been around a while though, have competitors managed to topple the Victory from its throne ?

The answer is going to be subjective, of course, but it's worth delving into nonetheless. Historically, Seafarer boats are rarely bought by first time boat owners. The reason for this deserves consideration. Rightly or wrongly, many people getting into boating base their decision on price. Budget restrictions are only partly behind this, price tags present a powerful argument, but it's the first time boat owners who have more difficulty perceiving the difference in boats that look much the same.

Seafarer's high standards have always been easy to overlook. However, if you dig a little deeper and compare the dry weights of a Seafarer hull and cheaper competitors, you'll find that our test boat, the Victory, is around 200, even 250kg heavier than cheaper boats (300kg if compared to aluminium craft).

So what ? Well, windy weather happens more often than not in boating. And, provided underwater shapes are on par, and there are more similarities than differences among the top few in this class, the difference in a heavier hull's rough water ride is all too often the difference between comfort and discomfort.

This applies equally to other boats at the pinnacle of the Aussie six-metre family/fishing boat genre, and neatly brings us back to whether the Victory has become dated. An answer came when I went out and re-tested a boat I've long held (admittedly, subjectively) in the highest esteem.

Yes, Seafarer's Victory has been around for ages, and yes it's been virtually unchanged for years. But no, emphatically no, it's definitely not dated.

The Victory's bunk sleeps two in comfort, but that's not at the cost of cockpit space, which is still among the roomiest. The Victory's split folding aft lounge is still as good as they get. You can anchor a Victory from either the cockpit or through the cabin hatch.

Helm ergonomics are spot on, whether you're seated or standing, and there's a grab bar along the screen frame right where it should be. You're well shaded at the helm with an optional bimini, which folds down easily for trailering or storage. And there's a fish pit-cum-ice box set in deck between the helm seats.

I could go on with details, but will save space by saying that anything competitors have, the Victory has.
Interestingly, for a boat that's been around since well before the current rage in four-stroke outboards, the Victory under test was not in any way disadvantaged by the 175hp Suzuki pushing it along.

Rated to a max of 225hp, the Victory hull with a 175 Suzuki planed at under seven knots and ran out to a top speed of over 40 knots. The combination simply felt 'right' perfect, in fact!

Some readers may know that Seafarer is nowadays part of the Haines Group; all I can say is while Seafarer ownership has changed, Seafarers are still built by the same people, because key staff came with the deal.
Which leaves us with a final question: if it's so good, is the Victory the best boat in its class ? Unfortunately, an answer can only be an opinion and that's inappropriate here.

What I'm happy to say though is that the Victory is clearly right at the sharp end amongst the leaders in an ultra competitive class. If you're looking at a six-metre family/fishing boat; you'd be a damned fool not to consider it.

Back to all Reviews >
Back to Boat Model >
Find a dealer ›